On a city break to Alicante! Sun, sea, sand, sangria and seafoods. Discover the things to see and do in a stylish city break destination…close to the beach.

From food to festivals, discover what  to do in the historic Spanish port:

If you’re a fan of browsing your local farmers’ market, then the Mercado Central is a must. Housed in a grand 100 year-old building, you’ll find dozens of stalls with wares ranging from bar snacks to entire rabbits. This is not for the squeamish, as there are a large number of butchers displaying their goods; making eye contact with a skinned rabbit can make some people quite wobbly. However, in other sections the aroma of florists and fruit stalls lingers in the air, creating an incredibly pleasant atmosphere.

Although it’s not a particularly colourful building, both the exterior and interior of the Basílica de Santa María (Santa Maria Church) are impressive. Intricate stonework in a baroque style outline the door into the small church, which was built between the 14th and 16th Centuries. The extravagant doorway leads to an even more lavish interior, the far wall being the focal point for your awe. This building is still used for regular religious services, so bear that in mind should you wish to visit. During large religious events such as Semana Santa for example, parade groups start from this church or the square outside, so if you want a good view then the plaza is a good bet.

Castell de Santa Bàrbara is hard to miss; this 9th Century fortress looms over the city from its hill-top position. The imposing structure offers unrivalled views of Alicante and the surrounding coastal areas. The walk up to the castle can be tiring, so fortunately there are other options for reaching the summit, such as the bus. A €12 ticket also gives you unlimited travel for a rest of the day around Alicante. There’s also a lift that costs about €2.50 per trip, although it’s free for retirees.

The beautifully-kept, palm-lined Explanada de España stretches along Alicante’s seafront. Dozens of cafés and bars line the walkway.The walkway itself has a somewhat mesmerising pattern laid in marble and is more than wide enough to accommodate tourists and locals alike, so although it is busy, it never feels crowded.

A city on the sea, the seafood in Alicante doesn’t get any fresher. Paella dishes can be found throughout the city’s restaurants, but the Taverna Dell’ Artista on Plaza de San Cristobal does one of its best.

Rambla de Mendez Nunez is the main shopping street in Alicante, wide, dotted with trees for shade, bars for snacks and cafés for food. A favourite place to refuel is the fig tree-festooned Plaza Portal de Elche. It’s hard to miss, but it’s on the bottom half of the street, on the east side.

Alicante has many wide plazas in which to kick back in the sun with a cerveza (lager). One of the loveliest is Plaza Portal de Elche, an ideal place to take life as slowly and enjoyable as possible on one of the year’s 300 days of sunshine.

A day trip to the Jalon Valley is definitely worth putting on the agenda if you are in the north Costa Blanca area. It’s a great drive with impressive mountain and valley views down to the sea. You will drive alongside vineyards and fruit orchards, with the blossom providing a sweet fragrance in springtime. Bodegas Xalo is opposite the car park by the riverbed in Jalon. In the bodega are large vats of wine. Customers are offered the chance to taste the wines, mistelas(sweet wines) and vermouth. Some of the wines have won national  awards and the cava is particularly good for the price.

A date with Dali

Fabulous collection of modern art is housed in a 17th century building which is a fine example of Valencian Baroque architecture, so it is worth visiting this art gallery to take a look at the building itself, which has been a granary, jail and school in the past. Works by some of the most important 20th century artists are here including Picasso, Cocteau, Miro, Dali, Max Ernst, and Francis Bacon.

If the sun, sea and sand are calling, regular buses go to 1.5km-long Guardamar Beach, 40km from Alicante. Cafés and restaurants back the beach with open sides and chairs right up to the sand. 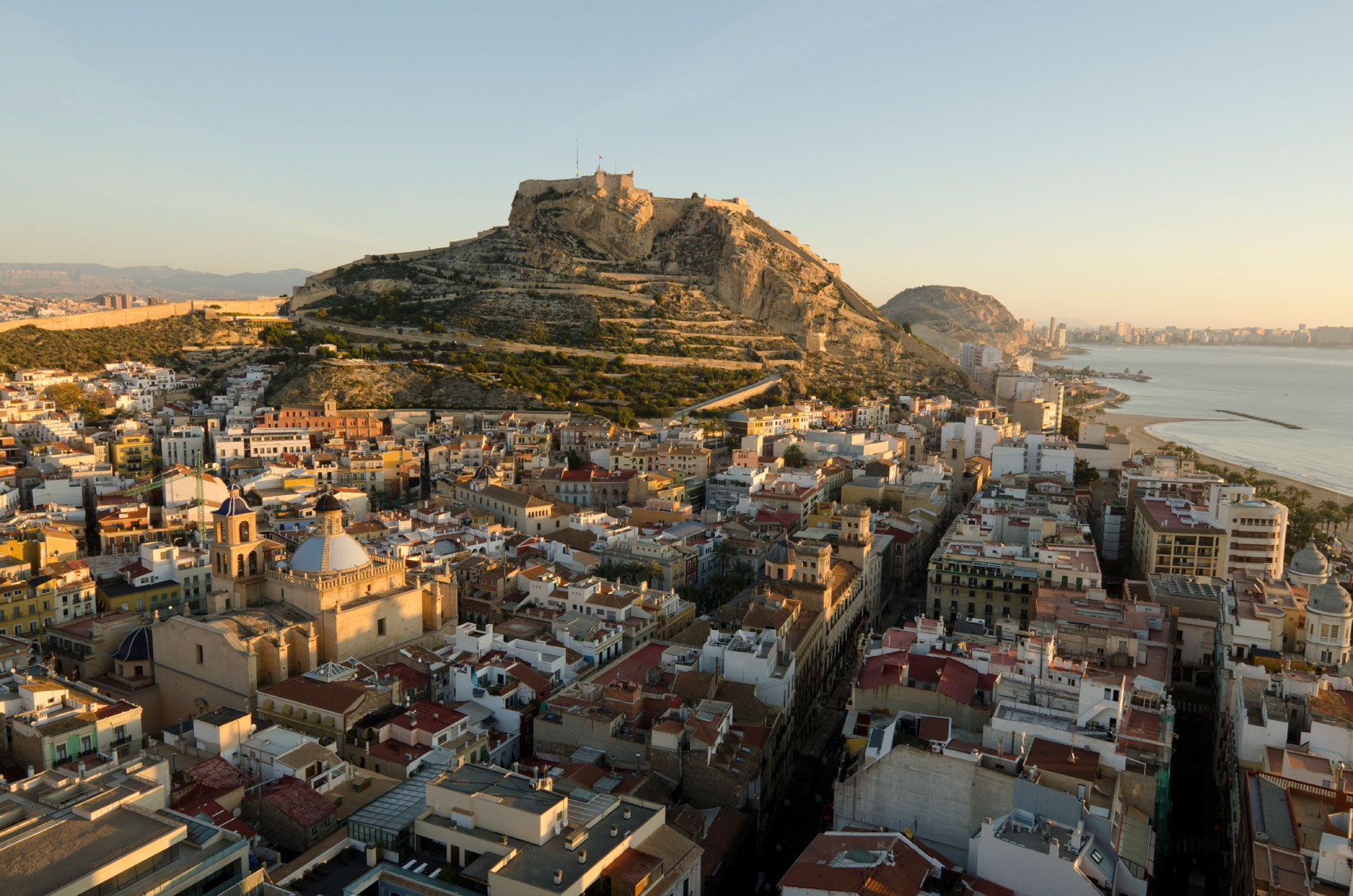 Alicante hosts a variety of seasonal events and religious festivals, which attract many visitors to this historical, intriguing and vibrant city.

The city is especially known for its colourful parades and fiestas, which involve huge parties with dance and music flowing throughout the streets until the early hours of the morning.

The locals are very passionate in upholding traditional festivals and thoroughly enjoy the amusement that comes along with them, as well as encouraging visitors to join them in celebrating together.

This festival is held each year on the 17th of January in the neighbourhood named after Alicante’s Patron saint, San Anton. The market sells traditional food such as dried fruits and nuts, and a small fair is held. Locals are also known for taking their animals to the bullring where they are said to be blessed. An animal show is also organised for entertainment.

Every year, around the time of Shrove Tuesday, Alicante celebrates a colourful carnival that lasts for three weeks.

The festival begins with the Don Carnal and Dona Cuaresma plays, followed by daily street celebrations. The highlight is on Sábado Ramblero (2nd of February), when the city’s main thoroughfares, La Rambla and El Barrio, fill with stunning costume parades, music and dancing.

Alicante city will be celebrating the carnival from the 12th to the 18th February 2015. The main parade is on Saturday the 14th at 19:30 from the Paseo Campoamor to the Plaza del Carmen, but there is also the Correfoc, and the devils ball to enjoy!

The carnival ends with a ceremony called ‘Funeral Wake and Burial of the Sardine’, during which masks and make-up get buried till next year’s carnival. To complete the mourning act, everybody wears black and carries a candle in their hand.

HOP ON & HOP OFF BUS TOUR

If you prefer Hop-on & Hop Off  bus tour in Alicante City or Just print the brochure and choose to walk for free – Click Here.

Have a Happy City Break in Alicante !

Links contained above will lead to other websites which are not under myholidaysnow.co.uk control, and we are not responsible for the content of any linked site or any link contained in a linked site. External Links provided to you only as a convenience and the inclusion of any link does not imply reliability and endorsement by us of, and we accept no liability in respect of, the content.